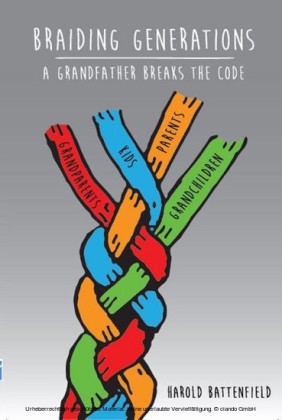 Dr. Harold Battenfield describes the ways in which he grew as a parent and grandparent, braiding together multiple generations into one family bound by a common thread. The moment after I tell you a story is the moment of your greatest recall. Once spoken words are brushed from my lips by breath or breeze, memory loss begins, and my story can be lost in less than two generations. Not wanting my life history to be reduced to a name on a headstone, I choose to record mine in print to offer up what has been meaningful to me in life, so my children and grandkids can know their family history, become witnesses to who I am, and better understand what I think and feel. This is my story about what it means to be human.

My Daddy's River O n Saturday afternoons the Cisco Kid, Red Ryder, and Lash LaRue fought cattle rustlers and land grabbers in Muskogee's darkened Broadway Theatre. Off-screen little white dots scurried up and down the aisles: kernels of popcorn rustled by theater mice back to their own hole-in-the-wall hideouts. The movies were entertaining, but my daddy's real-life adventures along the Illinois River far surpassed any action trapped in celluloid. During the early years of statehood, my daddy grew up outside Tahlequah, Oklahoma, near the banks of the Illinois River. Surrounded by beautiful gravel-bottom, spring-fed creeks, the rocky land of what was once known as Indian Territory allowed only subsistence farming. Life was often harsh and lonely in the frontier culture. He attended a one-room school through the eighth grade. Further grades offered in Tahlequah were an impractical, two-day journey in a horse-drawn wagon, but the knowledge he gained from experiences in that river valley could not be taught in a classroom. After the Cherokees were forced to walk over 2,200 miles on the Trail of Tears from North Carolina to Oklahoma, a tragic chapter in American history, they established their capital in Tahlequah in 1839. My daddy grew up among these Indian children. He fished the river and hunted with his dog. I listened with envy to his enchanting stories of living by the river and wanted a connection across our father-son generation gap. I yearned for a time and place long past that could give me love and comfort. Gasoline was cheap when my daddy took our family for country drives on Sunday afternoons. Whether we headed north, south, east or west, we always ended up on the banks of the Illinois River, one hour from our home in Muskogee. Tired of chewing dust in the backseat, my older sisters and I piled out of the car whenever he parked on the side of the road, following him across a pasture to another of his remembered vantage points. My mother would stay behind to spread a blanket under the shade of a giant sycamore and make bologna sandwiches with white bread, lettuce, onions, and mayonnaise. She had heard his river stories ever since they first dated along these banks. One Sunday in 1946 when I was nine, we stood on a six-foot bank overlooking the river. The three of us kids stood silent as our daddy's mind drifted back to when he was a kid, right there. After a pause, he began. "I was fourteen years old." He halted briefly, gazing upriver, as if waiting for a memory to drift into sight. When he spoke, he didn't seem to care if we listened. Yes or no, he would give voice to the memory churning in his mind, the conversation he was having with himself. "After a good rain lastin' several days, sometimes the river rose right outta its banks. Not a big flood, but enough to float off boats that'd been pulled up on the banks 'stead of tied. Because it weren't a long river, high water went down overnight." He looked back at us. "Right here on this curve was the best place to watch for flat-bottomed boats floatin' away followin' high water. Now I'm not talkin' 'bout store-bought boats like you see in movies that used tar to plug them cracks. We didn't have no tar for the leaks. Ours all leaked, just a matter how much." He held his hand up in front of his face to show us the cracks between his fingers. "Just like 'em cracks 'tween my fingers. Somebody's bailin' all the time. All boats was homemade from local timber, so no two boats just alike. As far back as I can remember, I only seen one painted and it was faded red. Must have been left over from a schoolhouse." He took a few steps closer to the edge and looked upriver to confirm his location. "Yep, this was the best waitin' spot to get a boat floatin' downriver. It was finders-keepers in those days. Boats didn't have no names or registration numbers.